By Author Nikki | April 9, 2012 - 7:03 am |January 19, 2013 Amazon, Apple, Barnes and Noble, Erotica, excerpt, Jasmine Haynes, Revenge Sex, Romance, Ruby Williams, Sony, Submitting to the boss, West Coast Book 1, West Coast Book 2
As promised I am back with Jasmine Haynes as she visits for this whole month of April.  Here is her promised excerpt of Revenge Sex!  Please make sure to comment and show her some love.  The contest for the PDF of Revenge Sex is still going on till April 15th!  So leave your email address with your comment as that will be how you will get the PDF if you win!
Fair warning it is explicit…
Now on to the story excerpt- 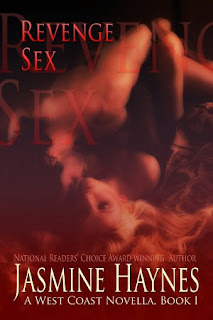