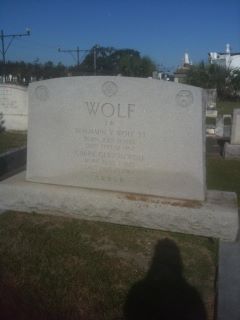 The Wolf Tombstone
No stone left unturned.
Click. Sometimes stories come together. As a writer, I push forward, waiting for those minor points of validation, where I’m told that what I’m doing is right. And, there have been times when the universe gives me a nod of approval.
Right before visiting New Orleans for the first time, I started writing my erotic paranormal series The Vampire, The Witch & The Werewolf. I had an idea of the location of the bookstore Pages, and other elements. Still, I wasn’t prepared for all the connections, and for how much I would be drawn to the city.
On that first visit, we hit up many of the regular tourist activities, including ghost and cemetery tours. The most well-known city of the dead is St. Louis #1, which is supposed to be the final resting place of Marie Laveau, the queen of Voodoo. On my second visit to the Big Easy, we ventured out with tour groups to a few other cemeteries. 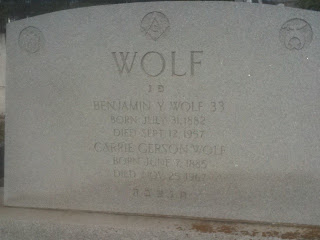 Sun high in the sky, beating down on us, our group walked through the above-ground tombs. A few found solace in the shade of trees. Then I saw it: The Wolf Tomb. I had no idea Wolf was one of the local family names. How perfect for the city where my werewolves lived.

At that point, some aspects of my series shifted. My main character Trevor Pack was a werewolf, without direct knowledge of his father. Now, I had a connection – Wolf.
Seeing that mausoleum became the stepping stone for my most recent novel The Wolfe Pack. In it, Trevor’s sister Silver leaves the French Quarter behind in order to find her father. Her future is destined by fate.
Take an Online tour of New Orleans cemeteries through NOLA Cemeteries.
Tell me: Do you believe in coincidences? Does this connection add another layer to the story?
Here’s a look at a new release: 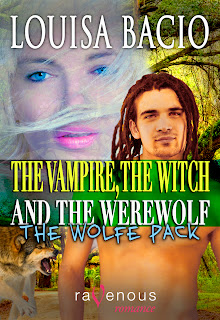 The Vampire, The Witch & The Werewolf 4: The Wolfe Pack

Silver Ashe can’t let go of the desire to find her birth father and the urge to join a pack. Against the wishes of her brother, Trevor, and her vampire-lover, Nick, Silver leaves New Orleans for the woods of Louisiana.
As the guard and a dominant member of the Wolfe Pack, Viktor isn’t too sure of the city-dwelling stranger who comes trespassing. With the lack of female werewolves, Viktor soon sees Silver as a potential mate. Too bad she’s already spoken for by a bloodsucker.
Trapped between worlds, Silver’s faced with choosing between the lover she’s known most of her life, and the budding relationship with Viktor, where her future may lay. It’ll take some sweet talking and a whole lot of loving for Silver to find her place within the pack.
Available now via Ravenous Romance, Amazon, Barnes&Nobleand other eRetailers.
As the tradition, to celebrate the release of The Wolfe Pack, I’m giving away an awesome New Orleans themed prize!
Hurricane Gift Basket
By Pat O’Briens
2 hurricane glasses and a drink mix, directly from the world famous Pat O’Briens in New Orleans. Shipping to the U.S. Value is worth $14.50 + the cost of shipping. I reserve the right to substitute the prize in case product is not available. If the winner is international, they can choose a $15 gift card to either Amazon or Barnes & Noble.
Until next time,
Louisa Bacio
http://www.facebook.com/louisabacio
http://www.twitter.com/louisabacio
http://www.louisabacio.com
http://louisabacio.blogspot.com