I tried my hand at flash fiction and found that I really loved it and will be trying it again.  Given a picture as a prompt this story was born. 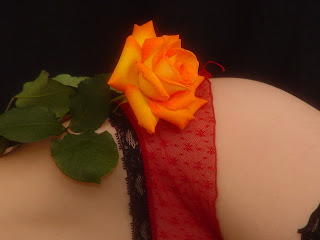 She looked at the rose on her hip. It was a beautiful fiery orange color such a contrast to her peaches and cream skin color. Master had given it to her and said if she was good he’d reward her with the right to wear his collar. She peered over at him as he stood at his easel painting what she assumed to be her. He’d placed her only in red panties, black silk stockings and the rose laying just so. He’d dressed her as tenderly as one would dress a doll.

“I can smell how wet you are. I won’t ease that ache until I am satisfied.”

She swallowed hard. Wanting to kiss him, to taste his full lips and become his and every way. This was a test and she’d excel at it. She’d been laying like this for over an hour. To be his, she’d lay there for as long as it took. His collar was the epitome of what she’d been striving for.

“Come here; look at what I’ve painted.” Getting up, she moved over to him, and gasped. He’d painted her and it was a perfect copy of how she’d been with one exception. In perfect color wrapped about her throat was his collar. Then she felt the cool leather as he placed the real thing on her neck and his arms pulling her close.

It was featured on Michel Prince’s blog along with some other authors flashes…do stop by: http://www.michelprincebooks.com/1/post/2012/08/adding-just-a-flash-of-color-to-end-the-summer.html