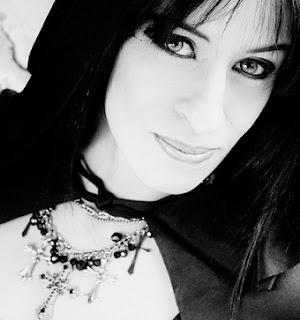 The author will be giving away a copy of Blood of Luna to a lucky commenter who leaves his or her email.
Welcome Maya it is a pleasure to have you here!

I am Erotic Vampire Author Maya DeLeina.
My favorite time of the year has passed, but it doesn’t mean that since Halloween is gone, vampires and paranormal creepiness are void from my life. Visions of vampires fill my head that have my fingers working non-stop on my laptop keys. In fact, for my new WIP, I am taking the fantasy world of vampires up a notch and adding some new elements.  But before I start revealing more about my WIP, get to know my latest release and see if the world I create is something you want to sink your teeth into.
Read the reviews, blurb and excerpt on Blood of Luna: 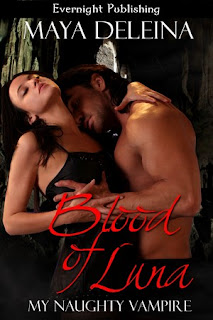 Reviews:
“This was a romance with plenty of twists and turns, a bit of a spooky edge and not to mention lots of steamy scenes that make you want a man like Trevor in your life. The scene with the “rubber” men was quite freaky, I don’t think I have ever found a read that actually unnerved me a little bit as this one did in that scene and to find out what they actually were was quite sad.

I wasn’t quite sure where the read was going at the start with the Prologue, starting off with Luna and Renny, then the entire read being about Trevor and Luna, but once you reach the very end you get enlightened to the whole situation. I did not see the ending panning out the way it did; the truth unraveling and everything being revealed as to the story behind Trevor and Luna’s connection, then the whole story got turned on its head yet again in the Epilogue!

The way this author writes is so smooth and enthralling; the whole story flows so perfectly and always keeps you guessing. It was a tough decision trying to rate this one, but I have decided on three and a half stars bordering very close to four stars.”-Book Devotee Reviews
“Paranormal erotic romance with a slice of spooky and a full helping of WTF is what I call this read.”
“Rubber men?! I keep thinking of the rubber man from American Horror Story, one of the creepiest things I have ever seen *shivers*”
“The “rubber” men were not only a bit freaky, they were probably one of the more original bad guys I have read about in a book. It does have a bit of a horror edge to it.”
Blurb:
When is it real? When is it fantasy?

For Luna Kalen, the line between reality and a dream is hard to recognize.

Recovering from a car accident, the solitude at the coast is meant to be therapeutic. But Luna soon finds it more than her idle mind can handle.

After exploring a dangerous stretch of shoreline, Luna returns home with a mysterious man she discovers in a cave. Little does Luna know that this man is about to fill her world with sinful pleasures…and blood-thirsty vampires.

When reality and fantasy collide, unimaginable dangers lurk, revelations are revealed, and darkest desires are fulfilled. But if you think the happily ever after is the sign of the ending, it’s really only the beginning.

Should Luna have listened to the warning?

Excerpt
Flood of emotions hit me like a tidal wave. I was relieved. Then I was angry. And then I grew scared. As I first suspected, there was something else besides Trevor in that cave. And since he felt the need to hide where he was going from me, the thought of what could be in the cave sent shivers down my spine.
“Luna?” Trevor’s voice echoed from within the confines of the cave.
I walked up closer to the cave and situated myself at the entrance. I couldn’t see his face to understand his emotions, but the sound of his voice said it all.
He was downright pissed.
“Trevor?”
“What the hell are you doing following me? I thought you were cooking!”
“Why did you come back here? What is in there that you are not telling me about?”
“You weren’t supposed to come here, Luna. You’re supposed to be cooking.”
“Tell me what’s going on. You owe me that!”
Trevor stepped out from the darkness to reveal himself to me. I scanned him up and down. The white shirt he had worn when he left the house no more than fifteen minutes ago was completely gone. He stood bare-chested with his shoes and slacks on. Oddly, his suspenders were still in place, wrapping around his flawless bare skin deliciously. And his ivy cap still dressed his head.
Then I looked in his eyes.
Far from what I was expecting, his eyes were cold and expressionless. Even further from my expectation was the deafening and awkward silence between us.
Not one word was spoken in response from Trevor.
I remained unusually silent trying to process what was going on.
While Trevor didn’t speak, there was a definite energy flowing from the cave’s depth that resonated in an eerie hum. Instinctively, I squinted in concentration, scanning the dark emptiness behind Trevor to make out the sound.
What I heard started off very faint but persistent. It was like I was back in the thick of my hectic morning commute, a combination of competing sounds of idling engines, conversation murmurs, blaring horns, and thumping music causing an indiscernible drone. Mounting and intensifying, the sound began to scare me.
And when I settled my eyes back on Trevor, the uneasiness in his body language and the anxiety in his expression made me freeze in terror.
Trevor dropped his head in an apparent air of defeat.
“Trevor?” I whispered.
Trevor raised his head and locked eyes with me.
“You were supposed to be cooking, Luna,” he whispered. His eyes began to tear. He took a deep breath in and released it slowly. “Keep absolutely still, or else you’ll send them into attack mode. I will try everything possible to protect you.”
I just nodded my head to acknowledge that I heard what he said. But I didn’t understand a word he said. I imagined my face must’ve had a terrible expression of fright right after the words came out of his mouth since he did everything in his power to calm me.
“Shh, Luna. Stay calm. I won’t let them hurt you.”
Trevor looked up and scanned the roof of the cave. My eyes followed his and scanned the space feverishly, not quite certain what I was looking for. Then he turned his head to the side. He looked back as far as his neck could stretch as the once faint hum was now a racket of bloodcurdling screams, eerie moans, and howling.
“They’re coming. Be brave.”
My heart pounded in my chest. I felt my knees go weak, and I became light-headed with the rush of adrenaline.
Who were “they”?
A rush of movement exploded from the darkness so quickly and overwhelmingly that I couldn’t process what was coming for me. Blackness swirled in chaos around my body, and the sounds emitted by the vortex-like cloud sounded like something from the pit of hell. I felt a cold dampness enveloping my body. A rubber, sponge-like feeling pressed and slid across my skin. Then, my body rose straight from the ground. My stomach dipped with nervous energy. I looked down and could see the sand peering out from behind the swirling blackness.
“Trevor? What’s happening?”
“They’re moving us into the cave. We’re going to their world now.”