Coming in October–Cauldron of Tales. 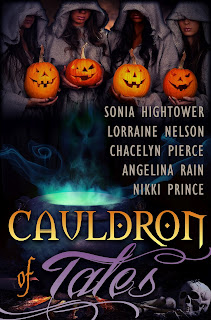 I am so excited to share this finally. Coming October 1st, 2012 with Angelina Rain, Sonia Hightower, Lorraine Nelson, and Chacelyn Pierce.  Cauldron of Tales—6 fascinating tales!

When five witches with wild imaginations get together, the pot boils over with trouble, romance, and sensuality.

Danica finds herself confused after a trip to the carnival with her best friend and coworker. She’s been attracted to Lisette for months, but are her feelings really being reciprocated, or was there A Sappho Spell cast in Madame Lilith’s tent? — with Lorraine Nelson and 2 others.