Welcome Author Kim Carmichael!  Kim will be giving away one ebook copy of Hands On Me and a lovely necklace. (Picture of the necklaces at the bottom).  Please leave a comment and email to enter).
Blushing At My Computer Screen:
Romance and erotic romance authors have a rare opportunity to live out fantasies we may never dreamed possible.  In our minds we can make love to a werewolf, or travel in time for a romantic rendezvous.  It really is an amazing job for someone who likes to live in his or her head!
However, along with this type of writing fun comes certain situations where even I have blushed at my computer screen:
Here are my top five blushable moments:
1.      The first time I wrote the word nipples –  Not peaks, not tight apex, but nipples.  It was my first foray into learning how not to use euphemisms for everything.  I actually turned away from my monitor as I typed the word, but I also crossed over the threshold into being a real author who doesn’t use purple prose.
2.      Dealing with the condom –  Unless we are writing historical or paranormal, safe sex is important, and many publishing houses require it.  Somehow putting the condom on gives me no trouble, but the whole disposing of it seems to perplex me.  It is not something that you want to spend a lot of time talking about, or at least I don’t.   I finally resorted to researching proper condom etiquette.  FYI the rule is that the man is responsible or dealing with his own… disposal.  For my story that was just released, Hands On Me, I managed to turn this once awkward scene, into something that helped move the plot along.
3.      Shaving and grooming – I never really discussed this at length, but then I had a critique that asked me to describe my hero’s “situation.” Every generation seems to have their own standards for handling their grooming.  Right now the trend is for little to no pubic hair.  I know use this to show something about my character.  Is my hero male a metrosexual who keeps everything perfect?  Or do I have a man who doesn’t care about following the crowd?  In a upcoming story I actually used this, not only as comic relief, but to show how my hero changes once he’s in love.
4.      Double Penetration – Anyone who writes sex scenes knows that it has to be more than an instruction sheet, but somehow my first double penetration scene gave me tons of trouble and lots of deep blushes.  There were just so many parts and pieces to fit together correctly, and I had to make sure my readers would understand what I meant.  I wrote the scene first as an outline making sure I had everything in the right place, and then came back and added in the plot, etc.  However, in a ménage romance, this scene can be one of the most emotional.
5.      Pushing My Own Limits –There have been many times where I have been lying in bed thinking about a sexy scene, it may push the boundaries, or sound a little left of center, but I have found that one hundred percent of the time when I go with my gut, push past my own boundaries and write the scene as I envisioned, it turns out much better.  For my upcoming story, The Promise, I was curious as to what would happen if my heroine was denied her orgasm, I went at it full-throttle, and it goes down as one of my favorite scenes I have ever written.
One thing I have learned from writing erotic romance is that if it turns me on, it has a better chance of doing the same to my readers.  At the end of the day, isn’t that what we all want?
I wish you all happy and sexy reading! 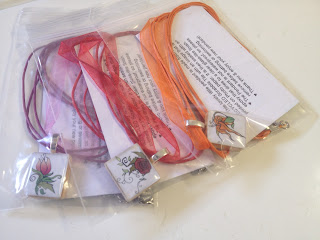 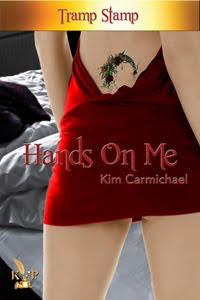 Hands on Me
Kim Carmichael
Agent Gwen Fredricks is a living target.  Captured after a failed mission, the code to crack a safe has literally been permanently hidden on her.  To free herself, she must retrieve a final key.   All
Agent Colin Alexander has to do to avoid a desk job is get a code said to be on an enemy agent.   He never dreamed it would actually be on the agent, especially Gwen.
The simple shoot-and-swoop mission takes a turn for these two sometime-lovers and full-time rivals when they call a truce to give into their desire.  Now with the promise to keep both hands on each other at all times, they share a night together.  Loyalties are tested when Gwen manages to swipe the key away, and Colin discovers the code carefully embedded into Gwen’s tramp stamp tattoo in a glow of UV light.  When morning comes they must decide if what they feel for each other is worth betraying their agencies.
About the Author: 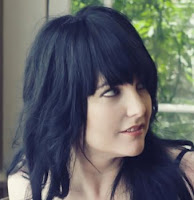 Kim Carmichael began writing eight years ago when her love of happy endings inspired her to create her own.  She has a weakness for bad boys and techno geeks, and married her own computer whiz after he proved he could keep all her gadgets running.  When not writing, she can usually be found slathered in sunscreen trolling Los Angeles and helping top doctors build their practices.
Website / Facebook / Twitter
Excerpt:
“Stop!” A man yelled.
The barrel of another gun met her inches from her face. She tensed, not from the gun, but from the familiar inflection in his voice. The position of both their weapons hid the man’s face.
“Get in and lower your gun, or we’ll both lose.”
“Back up and lower yours, or you won’t have a hand left.” No one told her what to do, not ever again. The click of her cocking her weapon echoed around them.
He stepped back. “Get in and close the door.”
With her gun still raised, she stepped and waited for her opponent to flinch first.
“Now.” He moved a fraction of an inch.
She did the same, and with the silent acknowledgement they would both comply, they lowered their guns in unison. She almost shot herself in the foot at the sight of the man who greeted her. Before she made a mistake, she de-cocked her gun and shook her head. “Colin?” Her body betrayed her by trembling. Was this her punishment?
“Gwen.” He shoved the gun in his waistband. “You’re the one. I would have never guessed.”
Think. She screamed at herself to remember her training, and not allow him to best her or distract her. She glanced around the room, giving her time to not look at him. Agents were supposed to be everyday people and blend in, but Colin Alexander stood out. From the moment she quite literally fell into his lap through a two-story ceiling three years ago, she wasn’t sure why his agency chose such a standout. She supposed his combed-back black hair and golden eyes were some bizarre form of female torture.