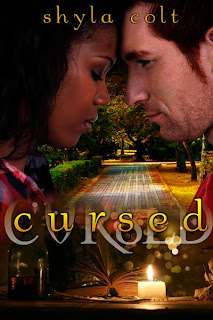 Please leave a comment with email if you want to be entered into the giveaway!

Hello All :Waves: First off I’d like to thank, Nikki for letting me stop by and chat to you all about my new release, Cursed due out on October first. This is my first in the Edgeworth Men series, and I’ll be doing a blog hop focused around the town the book is set in, Baxter. I’ll be giving away a prize every week, so be sure to comment to win.

Welcome to Baxter where everyone knows everyone’s name…. and their business. Deep in the heart of Mississippi this town has had a rash of broken heart’s caused by the Edgeworth boys, and rumor has it, it’s not their fault. Their great-great-great granpa got them in a heap of trouble when he bamboozled a local witch and jumped town with her money. Since then every man in the Edgeworth family has had crap luck in love. You’d think the towns women would stay clear of them but once they share that flirtatious wink, show those dimples, and turn on the charm … you’re sunk. Around here one of the most popular places for dining is, Hog Heaven. The BBQ is so good, it’ll make you smack your mama, and the atmosphere is casual, perfect for warding off those first date jitters. Come and see what part it played in Cursed for Avalyn, and Colton. Be sure to comment and win for a chance to win a Hog Heaven Gift set.

Summary
It’s common knowledge the Edgeworth men are unlucky in love.  Great, great, grandpa bought them a one way ticket to heart break when he romanced the local witch’s daughter, took her money and disappeared off into the sunset. Ashamed the Voiless moved away, until now. As the eldest son, it’s up to him to persuade the Voiles women to remove the curse.  He realizes quickly he wants to keep, Avalyn Voiles for himself.  Now he just needs to make her believe his affections are real and overcome decades of bad blood…
Avalyn’s spent her whole life hearing her grandmother bad mouth the Edgeworth family. So, the last thing she expects when she returns to Baxter, was for the witty, charming, sexy Colton to be her perfect match.  Should she take a chance on love and risk history repeating itself?

Fifteen minutes later, they were in front of Hog Heaven. She couldn’t help but wrinkle her nose up at the name and the apron-wearing pig with a chef’s hat that graced the giant sign in front of the tiny building. Smoke curled up from the back, and she guessed they had a smoker of some kind.

“Now don’t let the tiny building or the name fool you. This is the best barbecue you will ever taste. The meat melts right off the bone, and it’s smoked to perfection and bursting with flavor.” Excitement filled his tone, and his face looked almost reverent. “The sauces range from tangy to sweet and hot to mild, so there’s sure to be one that’s just right for you.”

“With a recommendation like that, I can’t wait to get in there.”

“I hope you don’t mind eating with your hands, because that’s the only way to do it justice.”

“I don’t have a problem with getting my hands dirty.”

He led her inside, and she was amazed at the amount of people packed into the small space. The delectable scent that assaulted her nose the moment they entered took away all her doubts. Any place that smelled this good was sure to be a slice of heaven. There were brown picnic benches covered with red table cloths taking up every inch. On each table was a roll of paper towels and a metal basket filled with an array of sauces ranging from yellow to a ruby-red you couldn’t pay her to touch. She liked heat, but that looked downright deadly. Colton followed her line of sight and grinned.

“That’s the devil’s brew. I don’t recommend it unless you’re into pain.”

She laughed out loud as they entered the line of people waiting to grab a seat. It was obvious this was a popular place among the locals. “I’m gonna have to pass on that one.”

They reached the end of the line and stood in front of the cash register. The meat was lined up and displayed on a carving station. She licked her lips and decided on the brisket plate with potato salad and an ice-cold sweet tea. No one produced sweet tea like the south, and she’d missed the sugary substance when they lived up North. It was served in a Mason jar with a healthy wedge of lemon. When they had piles of meaty goodness and sides on their plates, they chose a table toward the back, where it was less crowded.

“We have nicer places here in Baxter, but I figured if I was supposed to be showing you the town, local, home-cooked cuisine would be a better fit.”

“If it tastes half as good as it smells, this place will have a new regular.”

He chuckled, and a lapse in the conversation came as they prepared their food. She went with the hickory brown sugar sauce on her brisket. The meat was tender and moist, and combined with the sauce, it had her closing her eyes and moaning. The smoky meat’s sweet flavor was downright orgasmic. She could feel the calories piling on top of each other. She opened her eyes and found Colton’s gaze fixed on her. Heat blossomed in her cheeks, and she cleared her throat.

She smirked. “I’m southern. I thought enjoying fatty foods was a requirement of girls raised in the south. ”

Her head filled with thoughts of waif women who munched on salad and sipped on water with lemon. She suppressed a shudder. That was no way to live. She was a meat and potatoes kind of girl and liked her curves, thank you very much. She was proud of the bodacious Voiles butt and child-bearing hips she’d inherited. Unlike some, she was fortunate to have strong women in her life who taught her to buck tradition and love her form and her being for what it was. Because of all the people in the world, there was only one Avalyn Rae Voiles, and no one could do her better.

The eye roll that accompanied Colton’s statement earned him a few more brownie points. She liked what she saw so far, but she needed to test the waters.

Fifteen minutes later, their plates were clear and she was taking a blind leap.

“So, I heard the local woods here are haunted. Is there any truth to that?” She took a giant gulp of sweet tea to bolster her courage and glanced up. He chuckled and shook his head.

“I’ve never seen anything suspicious there myself, but if you ask me, there are supernatural beings out there living among us.

She laughed and relaxed. Well, he was open-minded at least. That was a start.

“Why? Do you have experiences with ghosts you feel like sharing?”

“Maybe?” She glanced up and cast a sly smile in his direction.

“A women of mystery, huh? I can respect that.”

His voice washed over her like liquor. The rich tone danced along her nerves, making her nipples harden and her thighs tingle. He made her want to forget her raising and head home with him for a night of smex. Better than your average lay, smex was a nasty, dirty, no-holds-barred ride to completion. He had bigger than average feet. She knew because she’d looked. It had her mind drifting to thoughts of what those thick, calloused fingers of his would feel like over her flesh. Avalyn shifted in her seat as her mind began to fill with images totally inappropriate for the dinner table. She was a woman in the middle of a draught so long she could barely remember what it felt like to be full of a stiff cock. She licked her lips and tried not to leer as she focused on the conversation once more. A quick romp was something she could’ve had years ago. What she wanted involved rings and vows, or at the least a long term commitment.

“So what brings you to Baxter? It’s not a city people flock to. It’s more of a town you grow up in and never leave.”

“No, I love it. This place has spoiled me for living anywhere else. We’re a hidden jewel. I think the hidden part is why we remain unchanged by outside influence.”

“My family is originally from here, but we branched out a few decades back to live a couple states over. My gran and my mom suddenly got the itch to rediscover our roots. The next thing I know, we’re headed back to the original Voiles homestead and buying a space out on Main Street for the store. Not that I minded really. I was tired of life in the city, and smaller towns tend to look on what we do with a kinder eye.”

“Make things from scratch and do our best to heal people. Maybe make this world a better place one person at a time.” She shrugged, embarrassed by her rant.

“I like that,” he said. A soft smile curved his cupid bow’s pink lips, and she felt herself melt just a little more. “Lord knows the world’s got enough negativity in it.”

“I like you more and more with every word you speak. That’s a rare gift you should share with the rest of your brethren.”

His cheeks reddened, and she swore she saw panic in his widened eyes. “My brethren.”

“Yes, men. They tend to put their feet in their mouths at least seventy-five-percent of the time.”

“Oh, them.” He laughed, but it sounded thin and reedy. It was obviously forced. Avalyn wanted to ask him what he’d thought she meant, but she didn’t want to ruin the wonderful report they had going because of a silly, misunderstanding.

“As much as I’d like to speak for my entire sex, I’m going to have to decline. I can’t even get my younger brothers to listen to me. Forget the entire world.”

She laughed. “How many brothers do you have?”

“Most of the time, no. Sometimes…” He trailed off and shrugged. “What about you? Do you have any siblings?”

“No. Despite how many times I asked my mother to give me a brother for Christmas, it never happened.”

He sniggered and shook his head.

She glanced down at her watch and sighed. “I’m enjoying this, but I need to head back to the shop soon.”

“I understand how it is when you own your own business. I’ll go settle the bill.”

She opened her mouth only to clamp it shut when he shot her a glare.

“Don’t you dare spout any Yankee nonsense about splitting the cost. I asked you out, and you accepted, so I’m paying.”

I hope you enjoyed that glimpse into , Cursed.