By Author Nikki | May 14, 2012 - 4:49 pm |January 19, 2013 Uncategorized
Hello all please welcome Willa and Schyler Brock and Keenan Fergason thank you all for coming and letting us get to know about about the three of you.
Character Interview: Willa and Schyler Brock and Keenan Fergason from “Falling Star” by Shay MacLean
How did the three of you meet?
Willa: *smiles and glances at Keenan seated on her left* Schy and I have been married for eight and a half years now.  And Kee and I started working together in the Peds Department about a year and a half ago.
Kee: *reaches over and lays his hand over Willa and Schy’s* And Willa introduced me to Schy at a hospital function. *g*
How do you feel about your life right now?
Schy: I think I can speak for all of us that we’re extremely happy that we are all together now.
What, if anything, would you like to change?
Kee & Schy: *in unison* Nothing.
Willa: *clears throat* Well I’d change the fact that they both steal all my blankets at night.
*Kee shares a conspiratorial smile with Schy though Willa doesn’t notice*
Where would you travel if you could go anywhere in the world?
Willa: I’d love to go to Hawaii, but these two keep hinting at going to Alaska. Even knowing that I’m not overly fond of the cold.
Schy: We’d keep you warm.
Willa: *glances at her husband* You know there are advantages to warmer climates too.
Kee: Like?
Willa: *turns head to look at Kee* Less clothes. *both guys moan* *Willa flashes a wicked evil grin*
Do you believe in public displays of affection?
Willa: *dies laughing* Do you really want to know about these two? When you read Falling Star you’ll see why I ask that. *g*
Do you want children?
Willa: Um…We haven’t talked about that yet. Someday maybe.
Schy: *clears throat*
Kee: *searches the room for something else to focus on*
What’s the difference between sexy and erotic?
Kee: I think there’s a fine line between sexy and erotic. A lot really depends on the person who is defining it, because what I might find sexy could be erotic to someone else. Sometimes what I find sexy I also find erotic.
*Willa and Schy nod in agreement.*
What is your secret sexual fantasy?
Willa/Schy/Kee: We’re living it. *huge grins all around*
Willa, how do you eat your Oreo cookies?
Willa: *grins* I twist it open slowly and lick up all the cream before nibbling the cookie halves until it’s gone.
*Schy and Kee squirm on the sofa as she describes how she eats them.*
Kee and Schy, boxers or briefs?
Schy: Boxers. Gives me room to breathe. *g*
Kee: *glances over at Willa and Schy* Nothing most of the time, but when I do wear them I choose boxers too.
Thank you so much you three for stopping by and letting all of into a little bit of your lives!  Readers please if you haven’t yet pick up Shooting Stars and Falling Star.  The links for that are at the end of this blog after the 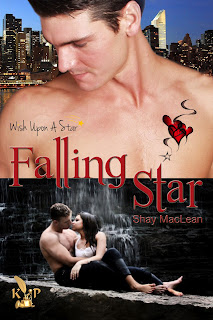 Stop by and purchase a copy.

Those that do will receive Shooting Stars FREE…
just email me at info@keithpublications.com with Shooting Stars in the Subject area.
Make sure you use the correct email that you purchase the book with.

8 Responses to Meet Willa, Schyler and Keenan from Falling Star