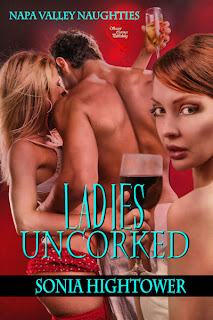 Announcing the first release of the Napa Valley Naughties by Sonia Hightower
Ladies Uncorked
There’s a reason the room on the ladies only wine tour is so cheap… There’s only one bed!
But it’s big enough for three…

Girls just wanna have fun and what better way to do that than a weekend wine tour? Rozella needs a break from caring for her mother and her friend Nicole is newly single and in need of a respite from her own troubles.

Their eagerness turns to mild dismay, however, when they discover they got a great deal on a fancy hotel room only because they’re apparently sharing a bed…a bed big enough for three. Will they make use of it? They may have a willing bedmate in the form of a sexy tour guide. But first, they must uncork their inhibitions.

Excerpt:
His gaze perused first Nicole, then Rozella, the glint in his eyes appreciative. Rozella busied herself pouring him a glass of wine. She willed her hands not to shake as she offered him the glass. “You’ve been left out of the festivities. I’m sure you’d like to make up for it now.” 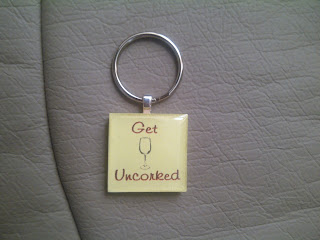 He accepted the glass with a twitch at the corners of his mouth. “Yes, I assume I will.” He watched her as he took his first sip. Rozella saw the moisture of the wine on his lips and fought the urge to lick them. But then again, what was stopping her? Isn’t that what he was here for? Did they really want to waste time with their life stories?
As Nicole led him to the bed and sat down with him, her own wine glass in hand, Rozella decided not. They weren’t interested in life stories tonight. The sexual tension in the air was palpable.
She grabbed her own wine glass and gulped greedily, watching as Nicole set her own aside to place one hand on Blake’s thigh and one on his back, leaning in close. The whitish-gold liquid stung her throat and caused her eyes to tear. She wasn’t used to drinking so quickly, and the wine from Vespera’s was more potent than a store bought vintage.
Nicole and Blake were whispering to each other, smiles lighting their faces. Rozella set her glass down, grabbed the wine bottle, and approached them. She gestured to Blake’s empty glass as she held the bottle out. “More?” 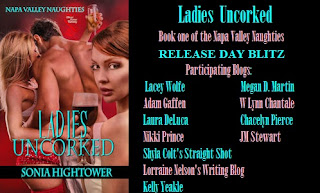 “No.” He grinned, set his glass on the nightstand, and rose to stand before her. His chest was almost touching hers. Her nipples hardened beneath the material of her dress. “Maybe after,” he murmured right before he caught her mouth with his own.
Available on Amazon and Secret Cravings Publishing.