Shyla Colt is a sassy stay at home mom who lives in Southern California with her Marine husband and two tiny tots. When she’s not crafting, teaching Abc’s, or playing make believe, she writes full time, and works a job in the publishing industry. As you can tell she thinks sleep is overrated.

A fan of romance from the moment she picked up her first paranormal romance at thirteen, she strives to provide you with stories that bring the heat, make you fall in love with the characters, and show the power of true love. She invites you to come and get lost in her world.

Comment Below for a chance to win a copy of Sorrow’s Muse. What is your favorite Greek Mythology story/character? 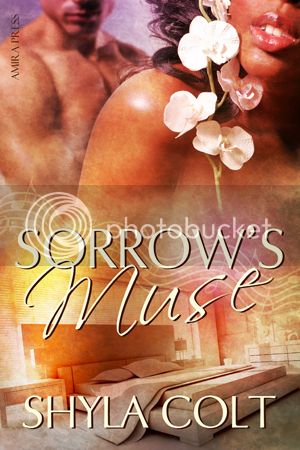 But Colette was never one for rules so she strikes a deal with the goddess of love. She has one year on earth to tell Julian what she truly is. Then he must make his choice, her or his talent.

Badly scarred in a fire that took his entire family Julian Sorrow is bitter and twisted by rejection and ridicule. Convinced his ability to make music is all he has to offer he’s given up on love. Can the sexy, mysterious new neighbor, Colette Starvos change that?

The conversation continued to flow as they took turns popping their bags in the microwave and salting and seasoning the puffy yellow kernels they placed in a large bowl. Grabbing two colas, they headed out to the living room. They were halfway through Sweet Home Alabama when she slipped his arm around her shoulder. She turned her head to inhale the delicious scent that wafted off him. The warmth of his body heated her flesh and woke her desire. Colette leaned in and nipped at his ear. Her nipples hardened against the rough lace of her bra. He moaned, a deep, guttural sound that went straight to her core. The pressure built, and she sucked the fleshy bottom of his ear into her mouth.

“What are you doing?”

She blazed a trail of kisses down his neck, spanning his chest with her hand as she admired his sleek build. He turned his head and captured her lips. Their tongues clashed. A pleased purr rumbled in her chest. Colette rose onto her knees and climbed into his lap, placing one leg on either side of his body. His cock pushed up against her in greeting, tempting her eager fingers. Her white skirt with a pastel flower scene flowed around them. She placed her hands on his shoulders and rocked forward, then backward, in a slow motion that pressed him against her engorged clit at just the right angle. His cock twitched, elongated, and swelled. God, he’s thick! She needed more contact.

“Touch me, Jay.” The nickname rolled off her tongue.

His breath caressed her neck as he leaned in to place tiny kisses on her pulse point and massage her lush mounds. “Like this?”

“Yes!” The feel of his hands moving over her was exquisite. He explored her with slow, thorough sweeps. His long, artistic fingers pinched her nipples, rolling them as he continued to grind up into her.

“You’re so wet, Col. I can feel you through my pants. You like what I’m doing to you, don’t you?”

He gripped her hips and swiveled in a circle. “How about this?”

Moisture flooded her panties, warm and sticky. Her breath came in pants as she edged closer and closer to the edge. So much for being the seducer. He might be slow to start, but when he did, he brought his A game. Her body trembled as he pushed her closer to her peak.

“Let go, baby. Let me give you this,” he whispered against her lips.

He lined his length up with her cleft, surged forward once, twice, and she exploded. Her eyes clenched shut. She cried out and clutched her skirt as waves of pleasure washed over her. Spent, she slumped against his shoulder as she came down from her high. All this from no skin-to-skin contact!

Instead of sating her lust, it had ramped it up higher.

“I was supposed to be seducing you,” she whispered, her face on his shoulder.

“You succeeded. Watching you come apart in my arms, knowing I’m the cause, is satisfying to me.”

He placed a sweet kiss on her forehead, and she fell just a bit more in love with him. She wanted to move forward in their relationship, bring him pleasure the same way he’d given to her so selflessly. Colette ran her fingers over the soft material of his shirt and peered up into his eyes.

“I want to make you feel good too.”

“Shh, I want to.” She scooted off his legs and knelt in front of him on the couch. His eyes were wide and his body shook as she unbuttoned the top of his pants and pulled the zipper down millimeter by millimeter, giving him plenty of time to call a halt to her progress. “I’ve dreamed about touching you, tasting you, for so long now it’s become an obsession.”

She looked up to make eye contact. His muscles were tense. His eyes were filled with worry and an expectation of disappointment that made her almost sick to her stomach. He is beautiful, damn it! She wanted him to realize it.

“The man who didn’t know I was alive, the hints I dropped none too covertly. It’s always been you, Jay.”

She gave him a gentle smile. “Because you ask questions like that, which make you even sexier than you already are.”

She freed him from his cloth prison, and he sprang forth, quivering with anticipation. He was thick, long, and growing. His skin was discolored and uneven here like the rest of his body, but she made a show of being nonchalant. She bent down to lick the damp tip, and he twitched, offering up more liquid goodness. He was salty with a hint of pineapple that made her core throb. He’d been thinking about this just as much as she had.

“You taste better than ambrosia.”

Colette teased him with delicate flicks of her tongue as she learned his flavor and his hot spots. The prominent vein that ran down the underside of his shaft made him jerk and hiss. She returned to it often, following it like a road map as she gripped his base and marveled at the ten inches she held in her hand. She sucked him deep into her mouth and brought her hand up to meet her lips.

You can find Shyla on the web in the following places

9 Responses to Sorrow’s Muse with giveaway!