I was invited by Louisa Bacio to join this blog hop and I have invited three more authors.  Please make sure to stop by her blog and show her some love as well.

Leave a comment for your chance to win a e-copy of Demon Mine!

Here are the questions—

What is the working title of your book? Demon Tempted (#2 in the Karmic Lusts Series)

Where did the idea come from for the book? It’s the second in the series and while I was writing the first the idea for a series came up.

Which actors would you choose to play your characters in a movie? Hmm you know what not entirely sure. Clay Quinones is a hot Latin male and Eva Jackson is a beautiful bad girl that people loved to hate in the first book. Kerri Washington was the inspiration for Eva when I was writing and Franky G was my inspiration for Clay.

What is a one sentence synopsis of your book? Eve has been a bad, bad girl.

Will your book be self published or represented by an agency/publisher? It’s going to Evernight Publishing

How long did it take you to write the first draft of your manuscript? I did it for NaNoWriMo. National Novel Writing Month. It’s from November 1-30. Challenged to write 50k in a month. I wrote the story in 25 days. It was tiring and grueling but I am proud to say the story is at 51,595 words. Demon Mine was only 24,570.

What other books would you compare this story to within your genre? Ohh it’s hard for me to compare. I try not to do that. I’ll let the reader do the comparing when the time comes.

Who or What inspired you to write this book? The whole what if Eve was the bad girl instead of of Lilith.

What else about your book might interest the reader? Loads of fun action this time. And a lot hotter than the first book.

Demon Mine the first in the Karmic Lust series is available at Amazon, Barnes and Noble, Allromancebooks, Bookstrand, and the Evernight Publishing site.

Blurb: Samael is a fallen angel doomed to repeat his life, and experience his love for Liliana Jackson, over and over again. That is until she finally remembers who she is and the reason for the curse that has befallen them both. Are they doomed to keep repeating the past? Or will there be a new future for the reincarnated lovers? 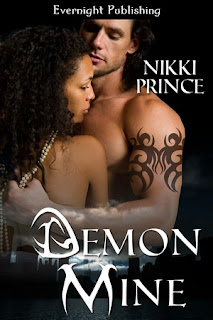 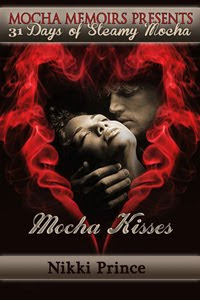 Blurb: Two mocha lattes and a pact. Though a decade apart in age and from different ethnic backgrounds, will their mutual love of books and addiction to mocha lattes make for one evening of pleasure or something more for geeky Ronan and Meredith? Meri didn’t think Ronan was serious about their agreement to spend time together if both were single by her thirty-fifth birthday. After all, he was still seeing that redhead when they made the pact. Ronan worried Meri would think him too young for the kind of commitment he wanted from her. Can one chocolate-drenched encounter overcome all their obstacles and concerns? 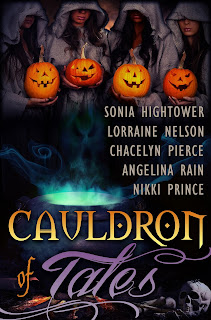 Cauldron of Tales is a five author anthology with my short story called Light of the Moon. It’s available at Amazon and Barnes and Noble

Blurbs:
When five witches with wild imaginations get together, the pot boils over with trouble, romance, and sensuality.

Danica finds herself confused after a trip to the carnival with her best friend and coworker. She’s been attracted to Lisette for months, but are her feelings really being reciprocated, or was there A Sappho Spell cast in Madame Lilith’s tent?

6 Responses to The Next Big Thing Blog Hop- November 28