Wil and Pleasure by Iyana Jenna 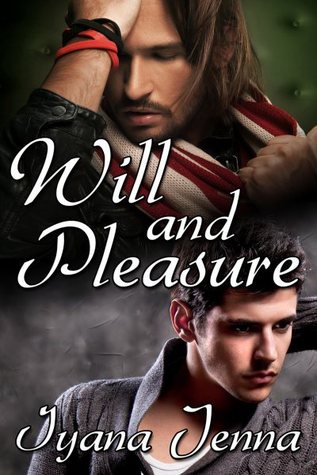 After his parents’ nasty divorce, Jake Welther was raised by his mother, so when his father dies, he’s surprised to find his name among his brothers’ in the will. Jake never thought he’d get anything from his old man, but neither the house nor the money is his inheritance. It’s a young sex slave named Luke.

Luke is a product of the streets. One unfortunate night, a bad encounter with a client ended with him curled up in an alley, filthy and hurt. When Craig Welthier Sr. took him in, Luke thought he was finally safe and protected. Little did he know Craig would turn out to be worse than any of his previous clients.

With his father gone, Jake doesn’t know what to do with Luke. His three brothers see no harm in continuing to use their father’s slave for their own twisted purposes. Though he doesn’t think of himself as anyone’s hero, he knows what Luke has endured at the hands of his family is wrong. Can Jake stand up to his brothers to rescue Luke? Will Luke find his happy ending after all?

Now Luke regretted not paying more attention to the other words Craig had spoken.

My family. In the darkness, his world was falling apart.

“Running away, are we? Forget it. Your place is here, among those of us who love you.”

His eyes flew open as his head was yanked back by his curls.

“And I see that you’re neatly dressed, eh? Since when have we permitted that?”

A flash of fury flickered in Luke’s mind. You can’t order me around, I don’t belong to you.

Alas, it seemed he could read Luke’s mind. The fingers around his arms tightened, so that he whimpered. His silent fury was replaced by trepidation. He looked up in terror at the man standing before him.

“You don’t think you belong to us now?” Craig Jr. gripped Luke’s jaw tightly. “What? What, you dare to talk back now?” The older man growled as he saw Luke attempt to say something. Craig squeezed his jaw one last time before he released it. Vision blurring with tears, Luke panted for a moment before he whispered his answer.

“I-I owe you nothing. My arrangement was with your father.”

That earned him a brutal backhand across his face. Luke almost forgot to breathe, and the brother clutching him was so surprised he almost let go, which would have sent Luke sprawling to the ground.

“You don’t talk to your owner that way,” said Craig. “Bring him inside!”

As the two at his sides heaved him back into the house and Craig slammed the door behind them, Luke realized that this time, the door was closed to him forever.

That was the best dream ever, Jake thought, as he turned over, still half-asleep. His right arm stretched out and smoothed the pillow beside him, reveling in the warmth of it.

It sent Jake’s eyes flying open, a frown creasing his brow. Warmth? What was the meaning of that? Had someone been there?

With a start, Jake turned sharply to his side and lurched into a sitting position. His breath came hard and fast.

That wasn’t a dream at all. He’d experienced the most gratifying pleasure that was brought to him by … by Luke, his late father’s sex slave. Jake almost gagged at the thought.

Jake shot out of his bed, grabbing his jeans and buttoning his shirt as he rushed to the door. He had a hunch that Luke had attempted to flee and two things whirled in his head — one, that his brothers had captured him and were now giving him the most heartless punishment …

… and two, which shocked him, that he was infuriated at Luke’s ploy. Somehow he felt cheated. How dare Luke do something like that to me! Jake felt like thrashing the guy himself instead of letting his brothers do it.

Luke stood in the corner of his small room, across from the door, clasping his hands between his legs, his body trembling.

The merciless brothers had forced the jeans down his legs and ripped them away, and then torn the seams of Jake’s T-shirt. Neither Seth nor Craig had bothered to ask him to take it off. They liked to see him writhe in agony as the tattered tee was pulled away from his body, cutting Luke’s skin, leaving it red and abraded. He slowly curled up against the cold floor with his back to them, his eyes squeezed shut, trying to keep in the tears. His lips tightened to suppress sobs.

But Craig wouldn’t let Luke alone. He barked an order to his brothers who jerked Luke back on his feet at once. Seth took Luke’s hands and wrenched them away from his body, while Luke tried very hard to pull them back. Horror filled his mind heard Craig’s heavy strides heading around toward his back.

Luke didn’t dare lift his face, though, and his eyes only caught the oldest Welther’s feet, so he missed Craig releasing his belt until it snaked from his hand, tip grazing the floor on the edge of Luke’s sight. Luke twisted in Seth’s grasp, weeping and pleading. Please, please. Not like this. Craig Sr. had never done this to him. He often threatened it, yes, but could often be dissuaded by a pathetic gaze.

Iyana lives in Jakarta, a city famous for its traffic jams, a lot of cars and motorcycles, and people selling stuff on the roads. You can spend two hours on the road going to a place you can reach in half an hour in a normal situation. Thanks to the traffic jams, though, Iyana can come up with a lot of stories, mostly shorties, as she prefers to spend the time during her trips writing into her cell phone rather than sleeping.

Another thing Iyana loves is kitties. Right now she has five of them. Their names are Larva, Nyil, Cil, Betsy, and Horus. When she doesn’t write, she plays with them, or they would play with her when she writes.